1. Objective: Identification of undersurface major arteries and veins is a challenge during endoscopic surgery, which is needed to avoid inadvertent injuries. Indocyanine green (ICG) fluorescence has been found to be promising in visualizing the undersurface blood vessels during laparoscopic surgery. However, the fluorescence of the vasculature disappears within few minutes.If a longer visualization of vessels is required, the ICG is injected repeatedly. A system is needed which can preserve the fluorescence information of the vasculature and provide it whenever required during the surgery.This study aims to develop a system that would superimpose the relevant information of fluorescence image from a previous scene on the white light image of the current scene that would be useful for locating relatively static vasculature throughout the surgery.

2.3 Segmentation of the vasculature

The region of interest in the registered fluorescence (simulated)  image was segmented using a threshold technique in its blue channel in the RGB color space.A Canny edge detector was applied to calculate the edge of the image.

2.4 Superimposition of the images

The software connected the endoscope camera to the NDI tracking system. An NDI tracking tool was mounted on the camera. The video frame and the respective pose of the camera was recorded. The endoscope image (TargetImage) corresponding to the segmented fluorescence image was stored and visualized as a target image plane with the segmented region of interest. The current frame of the video (CurrentImage) was visualized in the same navigation display. The user moved the camera to match the current image plane (CurrentImage) with the TargetImage when the alignement was needed.

A C ++ based software for the system was being developed in a computer with Intel R CoreTM i7 960@3.20GHz, 6.00RAM 64 bit Windows 7 and graphics card of NVidia TESLA C2075. The software uses the libraries of VTK, OpenCV and ITK. The superimposed view of the white light image and the edge image from the fluorescence (simulated) image  is shown in Figure 2 and 3.

This work develops a system which can store the information of the highlighted area in a fluorescence (simulated) image and superimpose the relevant information on a white light whenever needed. In future, the system would be applied on real surgery and the tracking matching would be replaced by a robot arm. 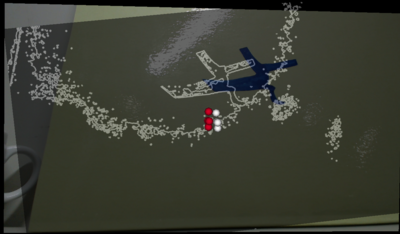 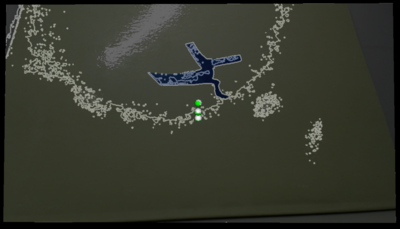