INTRODUCTION:
Clinical studies were carried out to validate the measurement of 64Cu absorption by a computer-assisted deconvolution.

METHOD:
After an oral dose of 64Cu (250 µCi), a plasma appearance curve was derived over 10 h from sequential blood samples. On a separate occasion after an injected dose of 64Cu (125 µCi), a plasma disappearance curve was similarly constructed. To remove the caeruloplasmin component in each curve, serum samples after counting were mixed in solution with sodium diethyldithiocarbamate and passed through activated charcoal columns; this separated non-caeruloplasmin-64Cu from 64Cu-caeruloplasmin contained in the eluate. Serum activity not bound to caeruloplasmin was determined by subtraction of the weight-corrected activities of 64Cu-caeruloplasmin and the complete sample. Both curves of non-caeruloplasmin data were matched by relating the data to the same dose level by the process of normalisation. Deconvolution of this data determined cumulative 64Cu absorption.

CONCLUSION: Against three I.V. tests, the percentage absorption is the same for the first two oral tests. A late meal was taken on the third test producing a lower absorption for the third test. The validation studies for the method is presented. There was a uniformity and reproducibility in the values of copper absorbed provided the protocol was rigidly adhered to and the subject remained on the habitual diet for three days before the test. 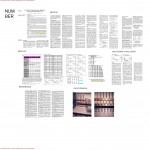