Advances in perioperative care and the resulting improvements in outcomes such as length of stay and complications can make comparisons between laparoscopic and open surgery difficult. Recovery may be a construct that is more relevant to patients and better able to discern differences between different approaches. The purpose of this study is to describe the recovery of functional status in elderly patients undergoing laparoscopic versus open surgery.

This is an ongoing prospective cohort study of 55 patients aged 70 or older who underwent major elective surgery, laparoscopic (n=12) or open (n=43), between October 2012 and July 2013. Patient characteristics were recorded including age, sex, Charlson Comorbidity Index (CCI), diagnosis, and procedure type. The primary outcome was lower-body function, as measured by the Short Physical Performance Battery (SPPB), a tool designed to quantify performance and decline over time, at 4 time points: preop, 1 week postop, 1 month postop, and 3 months postop. Patients were considered recovered when their postop scores was equal or higher than their preop scores. We provide descriptive results for exploratory purposes with group means compared using an unpaired Student’s t-test. Proportions were tested using a Z-test of proprtions and medians were tested using Mann-Whitney U test with p-values reported.

Preliminary data suggest that the SPPB may be a good measure to compare recovery in elderly surgical patients following laparoscopic and open surgery. 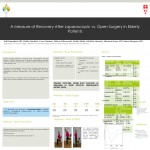