A Direct Measure of Copper Absorption in Healthy Volunteers

Objective: Studies in rodents and in man enhanced by copper deficiency both demonstrated a major controlling influence on copper absorption from copper status induced by dietary control. A computer-assisted deconvolution method was used to study 64Cu absorption in healthy volunteers on their habitual diet. This group of twelve adults comprised of six men and six women, three of whom were on oral contraceptives (OC+).

Results: The mean 64Cu 10-h absorption (±SD) for a single subject validation tests was 44.3 (± 8.4) % (n=9) compared well with the overall result. Cumulative 10-h absorption for all twelve subjects was 43.7 (±10.2) %. With no evidence to support copper absorption from the stomach in man, variation in the initial peak after oral 64Cu and delay in caeruloplasmin rise seemed to relate to the influence of gastric emptying on absorption. With 50% occurring in first 1½ h and 94% by 7½ h, the 10 h cumulative 64Cu reached a plateau. Excluding OC+ subjects, 64Cu absorption was 42.3 (± 9.7)% (Mean ± SD) (n=9), and serum copper and caeruloplasmin, 64Cu-caeruloplasmin synthesis and 64Cu urinary excretion were all similar suggesting equivalent copper status in spite of preparation on their habitual diet. Removing those subjects in less standard conditions, (a shift worker, a subject with dyspepsia and a previous cholecystectomy, and a subject on oral contraceptives (OC+) in last part of the menstrual cycle who had been vomiting) 64Cu absorption for the normal group (5 male, 2OC- female, 2OC+ female) was 45.2 (± 5.2) % (or 11.4%) n=9 (or 2.00 ± 0.16 %/BMI (or 7.9%)).

Conclusions: Because of venous sampling on each arm of the test balanced out the influence of copper status, this study reflected directly the influence of mucosal copper status. The mean absorption for male 44.2 (±8.6%) and female 43.1 (±12.4%) subjects did not differ except in the greater variance of the female group. Without oral contraceptives (OC+) data the rate of 64Cu incorporation into caeruloplasmin in female subjects and male subjects was the same. The normal data gave a more tightly defined group with a low coefficient of variation, but included two OC+ subjects in the first part of their cycle. As a control against a patient group, data without those on oral contraceptives was used as the control group 42.3 (± 9.7) % (or ±22.8%) (n=9) (or 1.84 (± 0.43) %/BMI (or ± 23.4%)). 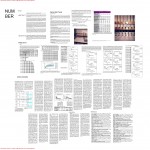