A Comparison of Operative Time Outcomes in Laparoscopic and Open Procedures

INTRODUCTION: Prolonged operative time is often considered a drawback to laparoscopic surgery due to concerns for increased morbidity. There is limited data on the specific operative time (ORT) when the benefits of laparoscopic procedures are outweighed by faster open procedures. The objective of this study is to identify the time when an open operation becomes superior to its laparoscopic counterpart. 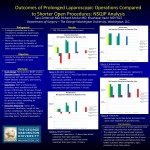