A Clinical Study On Postoperative Endoscopic Appearance of Anastomosis Early After Esophagectomy.

(Background and Aim) Esophagectomy and esophagogastrectomy are major operations with high mortality and morbidity, for which anastmotic leakage of esophageal substitute is a serious and potentially fatal complication. The purpose of this study was to verify the significance of postoperative endoscopy early after esophagectomy.
(Patient and Methods) The median age was 67 (range 59 to 75)years.All patients underwent transthoracic esophagectomy with a gastric tube reconstruction for thoracic esophageal cancer. Anastomoses were all performed in an end-to-side fashion using a circular stapling device. The gastric tube was pulled up through the retrosternal route in four patients and through the posterior mediastinal route in another patient. Postoperaitive endoscopy was performed around 2 weeks after operation to evaluate the esophagogastric anastmosis.
(Results) One patient developed anastomotic leakage,for whom postoperative endoscopy demonstrated thick yellow necrotic tissue, not in the anastmotic site but at the stump of the gastric tube,which was suspected as the point of leakage. In other cases, small necrotic tissue was identified, while the anastmosis remained intact.
(Discussion) The reason for anastomotic leakage was considered as the lack of blood flow at the stump of the gastric tube. The incidence of anastomotic leakage might be reduced by choosing end-to-end anastomosis, provided that the anastomosis is performed at the same point. 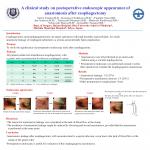