Introduction: To evaluate the advantages and disadvantages of LDP comparing with ODP in the postoperative pain, postoperative recovery and postoperative morbidity.
Methods: From December 2003 to May 2011, patients suffering distal pancreatic diseases were enrolled to analyze the postoperative data. Additionally, all patients were divided into Early Group (2003-2005), Medium Group (2006-2008) and Late Group (2009 – present). Postoperative characteristics among the three groups were compared respectively to access the impact of the surgical experience on LDP.
Results: 170 patients were included with 69 in LDP group and 91 in ODP group. The operation time was similar between the two groups, while LDP group was associated with less blood loss (183.56±120.34 ml vs 382.4±144.6 ml,P<0.05). First flatus, first liquid diet and postoperative hospital stay in LDP group were significantly shorter than those in ODP group. Moreover as well as VAS scores (1.9±0.6 vs. 2.6±0.6,P=0.05) and analgesics (20.7±11.6 vs. 55.6±30.2,P<0.001). The postoperative morbidity of LDP were significantly lower than the ODP group (17.4% vs. 31.8%, P <0.05), while the incidence of pancreatic fistula was no significant statistical difference (11.6% vs. 18.6%, P = 0.221). About the learning curve of LDP, The operative time, blood loss and postoperative hospital stay of the Late group were significantly lower than that in the Early group, while postoperative morbidity were no significant difference among the three groups.
Conclusions: LDP is a procedure as safe and feasible as ODP, and has the advantage od mini-invasive, such as recovery more quickly, alleviating the postoperative pain. The change point of learning curve for LDP was 40 cases. 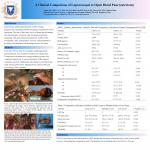