A Case of Pseudolymphoma of the Liver Operated With Laparoscopic Surgery

Hepatic pseudolymphoma (HPL) and primary hepatic marginal zone B cell lymphoma of mucosa-associated lymphoid tissue (MALT lymphoma) are rare diseases and the differential diagnosis between these two entities is sometimes difficult. Here we experienced a case which was diagnosed for HPL by laparoscopic liver resection.
The patient was a 56-year-old woman. She was pointed out SMT of the stomach in 1996. She visited our hospital for investigation. Ultrasonography revealed the SMT was exclusion of liver itself and high echoic tumor which size was 9mm was detected in the left lateral segment of the liver. As serology examinations for hepatitis C viruses was positive, she was followed in outpatient. Magnetic resonance imaging performed in 2008 suggested the lesion was suspected for hepatocellular carcinoma. She didn`t hope further treatment at that time. In 2011, imaging study using computed tomography and magnetic resonance imaging showed tumor margin was enhanced in early phase, but was low signal in delayed phase. Under a diagnosis of well differentiated hepatocellular carcinoma, laparoscopic lateral segmentectomy was performed. The lesion was white and hard with clear margins.Histopathological examination showed Lymph follicles with germinal centers were well formed and lymphocytic infiltration was extended along portal tracts. Immunostainings for CD3, CD20, and CD79 revealed regularly distributed T cells and B cells. In situ hybridization for immunoglobulin light chains was performed because it is one of the useful tools to discriminate between reactive lymphoid lesions and MALToma. In situ hybridization revealed no significant difference between the numbers of cells positive for kappa-chain and lambda-chain. Based on these histological features, the lesion was diagnosed as pseudolymphoma of the liver.Surgical margin was negative. The postoperative course was uneventful, she was discharged on POD 8. We experienced a case of Pseudolymphoma of the liver which was operated after 15 years follow up. 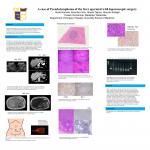