A Case of Portal Vein Thrombosis After Laparoscopic Low Anterior Resection of the Rectum.

Introduction: Portal vein thrombosis (PVT) after laparoscopic surgery is a relatively uncommon but potentially lethal complication. There are several reports of PVT after laparoscopic surgery such as laparoscopic splenectomy. There are only a few reports of cases with PVT after laparoscpic colectomy for malignant tumors. However, its true incidence may have been underestimated due to difficulty in making the diagnosis. We report a case of PVT in a patient with no hypercoagulable states and risk factors for thrombosis, who underwent laparoscopy assisted low anterior resection of the rectum.
Case: The patient is a 55 year old male with no past medical history. He noticed hematochezia and came to see his family physician. Colonospy revealed an early stage rectal cancer. He underwent endoscopic mucosal resection (EMR) for the lesion. The pathological examination showed the mucosal lesion with no positive margin and no vessel invasion. A follow-up colonoscopy showed a recurrent lesion. He undertook laparoscopy assisted low anterior resection for the recurrent rectal cancer. On eleventh day after operation, he noticed abdominal distention. Abdominal CT revealed thrombi in the umbilical portion of the portal vein. His general condition was stable and his symptom disappeared on the next day. We started systemic anticoagulation therapy with Warfarin. The thrombi were not detected on the follow-up CT four months after the onset. We continued anticoagulation therapy for six months after the follow-up CT. The patient is followed as an outpatient with no signs of recurrence.
Result: PVT after laparoscpic surgery is uncommon and difficult to diagnose because of nonspecific signs and symptoms. Its presentation, treatment, and outcomes are poorly understood. Possible etiologic factors are malignant tumors, abdominal inflammatory diseases, alteration in coagulation during pneumoperitoneum, intraoperative damage to the splanchnic endothelium and systemic thrombophilic states. PVT should be diagnosed and treated precisely and promptly, because it can be lethal. 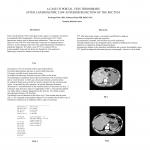