We report an extremely rare case of primary low grade mucosa associated lymphoid tissue (MALT) lymphoma of the esophagus. An 74-year-old man was referred to our department in June 2006 for further examination, because of the slight elevation of serum squamous cell carcinoma antigen level and an abnormal accumulation in the mediastinum on the PET-CT. Although a phygical examination showed no significant abnormalities, endoscopic examination revealed submucosal tumor of the esophagus and the status of the former total gastrectomy due to gastric cancer. The lesion was covered with intact mucosa and located in the proximal esophagus, 17-21cm from the incisor theeth. Endoscopic ultrasonography revealed a longitudinal growing hypo-echoic mass located in the submucosal layer with internal honeycomb-like anechoic lesions. Endoscopic mucosal resection using a cap fitted panendoscope was performed for the submucosal tumor. The lesion was composed of diffuse small atypical lympoid cells which were stained with CD 20. The tumor was considered to be completely resected and additional treatment was not administered. H pylori infection was not confirmed. Only five cases of primary esophageal MALT lymphoma have been reported to date. Generally MALT lymphomas are indolent and tend to disseminate slowly. However the behavior of this disease is not known clearly, and a standard treatment is not established because of its rarity. Follow up of entire organ at an interval of 6 months is adopted. The patient is alive and well without recurrence 26 months after treatment. 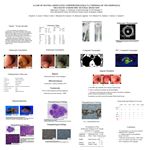