Paraesophageal type of hernias accounts for a very small percentage of hiatus hernias. Moreover, cases involving protrusion of the colon and the stomach are extremely rare. Here we report positive results achieved from a reparative laparoscopic surgery using a mesh for a paraesophageal hiatal hernia with protrusion of the stomach and colon. A 66-year-old woman, eight years back, the subject consulted a physician, complaining of abdominal distension and nausea and was diagnosed with an esophageal hiatal hernia by an upper GI tract contrast study. The patient was also diagnosed with GERD and was treated conservatively with oral proton pump inhibitors (PPI) since then. Although the subject’s symptoms temporarily improved, she began to experience recurrent exacerbation and remission, and also experienced frequent postprandial vomiting from May 2010, losing about 6 kg weight during the ensuing two months. This was thought to be caused due to an obstruction accompanying esophageal hiatal hernia. A GI tract contrast study and CT imaging revealed a paraesophageal hiatal hernia with protrusion of the gastric corpus and antrum, as well as transverse colon. A course of laparoscopic surgery was decided. Trocars were inserted into the umbilicus, the left and right epigastric region, the left and right lateral abdomen, and below the xiphoid. Intraperitoneal observation revealed protrusion of the stomach and transverse colon into the mediastinum. No adhesions were observed on the hernial sac, and the organs were returned to the peritoneal cavity. When an incision was made in the lesser omentum, a hernial orifice, 6 cm in diameter, formed by the dilated esophageal hiatus on the right side of the esophagogastric junction became evident. No malposition of the esophagogastric junction and sliding-type complications were observed. The esophagus was taped and pulled to the left, and a 6 x 6 cm surgical mesh was sutured and fixed to the diaphragm and the phrenico-oesophageal ligament to close the hernial orifice. An intraoperative endoscopy was performed, which confirmed the absence of esophageal stricture. The patient showed a favorable postoperative course and began eating on the second day after surgery. She was discharged on the fifth day postsurgery as reflux symptoms were not observed. Stricture due to adhesion and granulation is a possible, but rare, complication of mesh usage. There are reports suggesting migration to the thoracic region and the pericardium. Careful follow-up is required in the future for a long-term prognosis. 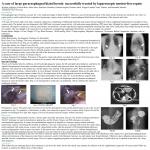