A Case of Huge Esophageal Hamartoma Treated By Endoscopic Resection

In general, hamartoma frequently occurs in the lung, heart, or hypothalamus, and its occurrence in the gastrointestinal tract is very rare. We report a patient who underwent excision of a giant esophageal hamartoma by endoscopic resection under general anesthesia and review the relevant literature.
The patient was a man in his 40’s with dysphagia. Upper gastrointestinal endoscopy demonstrated a giant pedunculated polyp that protruded from the esophageal entrance. Esophagography revealed a mass with a smooth surface measuring 13 × 4 × 3 cm in size, with a stalk measuring approximately 2 × 2 cm. Taken together with the chest CT and MRI findings, a tentative diagnosis of fibrovascular polyp was entertained. The tumor was successfully excised by endoscopic resection with a snare under general anesthesia. The final pathological diagnosis was hamartoma of the esophagus. The patient had an uneventful postoperative course and was discharged in good general condition 9 days after resection. He remains asymptomatic without recurrence as of 2 years after endoscopic resection. 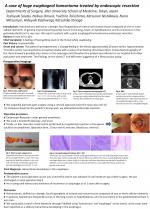