We report a very rare case of clear cell adenocarcinoma arising from endometriosis of the rectum. An 83-year-old woman was admitted for the chief complaint of hematochezia in June 2012. There was no previous illness except for hypertension.

Preoperative serum tumor-marker, CEA, CA19-9, anti-p53 antibody, and CA125 level were within normal limits. On laparoscopy, no metastasis of the liver or peritoneum was seen; however, the rectal tumor partially adhered to the uterus. During surgery, no tumor was identified at the radial margin of the uterus. Laparoscopic low anterior resection and partial resection of the uterus were performed in July 2012.

Histopathological examination revealed an adenocarcinoma, similar to clear cell carcinoma of the ovary, invading the subserosa and no metastasis of lymph nodes. Immunohistochemical staining showed diffuse weakly positive membrane staining of tumor cells with CA125. There was also diffuse strong positivity for cytokeratin 7, but no staining for cytokeratin 20, which was in the stained adjacent normal colonic mucosa. Finally, a diagnosis of endometrioid adenocarcinoma was made.

There is a report that the rate of malignant transformation in endometriosis is 0.7 – 1.0%, with 80% occurring in the ovary. Endometrioid adenocarcinoma arising from ectopic endometriosis is very rare, and was first described by Marx in 1949. Including our case, 7 cases have been reported in Japan. Surgery is the first choice of treatment, but there is also a report that hormonal treatment and systemic chemotherapy are available. Careful observation is required because the prognosis following malignant transformations in endometriosis is poor.

We report a very rare case of endometrioid adenocarcinoma arising from ectopic endometriosis of the rectum treated by laparoscopic surgery. 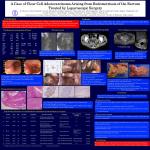