Introduction: Our aim was to determine the number of bile duct injuries requiring biliary reconstruction after laparoscopic cholecystectomy in England over a 5 year period, and to investigate factors associated with increased risk of bile duct injury.

Results: The number of cholecystectomies increased year on year from 33569 in 2001/2 to 46243 in 2005/6 and the percentage of emergency cholecystectomies increased over the same time period from 9.47% to 12.28%. The percentage of patients who underwent laparoscopic cholecystectomy and required subsequent biliary reconstruction was similar (0.22 % 0.25%, 0.24%, 0.21%) in the first 4years studied, but showed a decrease in the final year (2005/6) to 0.16%. Male sex was significantly associated with bile duct injury requiring biliary reconstruction. 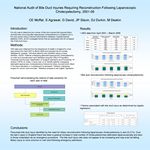