Introduction: Our aims is to objectively assess the adverse effects of the two display systems 2D and 3D and their impact on surgical trainee’s laparoscopic performance.

Methods: 24 novices with no medical or visual problems were prospectively recruited and randomised to 3D and 2D groups. Candidates were trained to perform laparoscopic intracorporeal suturing according to the fundamentals of laparoscopic surgery (FLS) curriculum until task proficiency is achieved. Performance times, number of repetitions and errors were appraised. The candidates were swapped to the other vision system in a crossover design.
The assessment of the adverse effects of  2D and 3D vision system was performed using the Standardized Simulator Sickness Questionnaire (SSSQ). SSSQ is a validated self-reporting questionnaire composed of a 16-item symptom checklist reported as 3 main categories: nausea, Occulomotor and disorientation, specifically designed to investigate the vision systems. Candidates filled in the questionnaire after reaching proficiency in both vision systems. Scores more than 20 indicate candidates are appreciating sufficient discomfort, scores below 5 indicate symptoms are negligible.

Results: In regard to performance, there was no statistical significant difference between the two groups in the total time to reach proficiency. Number of repetitions to reach proficiency and accuracy errors were significantly lower in the 3D group compared to 2D group. (P <0.0002)
By analyzing the SSSQ, The median and Interquartile range of the Nausea subscale score was 9.5 with IQR of 18.6 and 9.6 for 2D and 3D respectively (P <0.144). Oculomotor symptoms score was higher in 3D group resulting in 22.7 with IQR of 15.2 compared to 15.16 score with IQR of 22.7 for the 2D group (P<0.032).
Disorientation related score was drastically higher in 3D group with median of 13.9 with IQR of 9.3 compared to 0 in 2D group with 41.7 IQR (P<0.257).
The total score differences between the two groups was vastly evident at median of 14.9 with IQR of 9.3 for 3D group compared to 9.3 with IQR of 8.4 for the 2D group (P<0.019)

Conclusion: Although oculomotor and disorientation symptoms are more prominent in the 3D group in comparison with 2D group, the candidates demonstrate statistically significant superior performance. However this technology still needs to overcome the draw backs of the induced oculomotor symptoms. 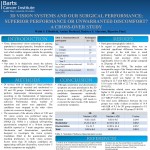