Introduction:
Conventional laparoscopic camera consists of a 2-Dimensional (2D) system and although there is improvement in graphics from high definition (HD) system, there is still a lack of depth and spatial perception. There is much training needed to master laparoscopic techniques as there is a need to interpret secondary spatial cues such as shadow and motion parallax. 3-Dimensional (3D) systems may potentially improve laparoscopic training by eliminating the need to overcome the loss of stereoscopic vision. Given the limiting working hours by Accreditation Council on Graduate Medical Education (ACGME), 3D system may potentially reduce time and improve the laparoscopic skills training of residents. The aim of our study is to assess the benefit of 3D system in the training of laparoscopic skills.

Methods & Procedure
This was a prospective study involving 20 individuals performing pre-determined laparoscopic task in a box trainer (JnJ TASKIT) under 2D or 3D imaging with the 3D TIPCAM1 Karl Storz Laparoscopic Stack. Volunteers were recruited according to their laparoscopic experience/expertise and allocated into 4 groups, each with 5 participants (1) No previous experience/exposure”, (2) Novice, (3) Intermediate & (4) Advance. The tasks were sugar stacking, beads stacking, transferring beads, rubber band placement and beads to string. The time taken to complete each task and the number of errors (pass-pointing and dropping of objects) were recorded. For the Advanced group, they were required to perform an extra task of laparoscopic suturing – this was assessed using a validated 29-points scoring system. All the tasks were performed initially in 2D then 3D and then 3D to 2D with at least a 24 hour washout period between the assessments. Results were analyzed using student’s T-test and Wilcoxan Signed Rank test (StatsDirect Software).

Conclusion:
The stereoscopic advantage of 3D imaging in laparoscopy avails itself in those who are in training by improving co-ordination, spatial awareness and timing in comparison to the traditional 2D imaging. However, in surgeons who have already obtained proficiency in advance laparoscopic procedures, 3D imaging does not confer any advantages as demonstrated in our study. Technology will advance and improve. 3D laparoscopy can reduce the time needed and steepens the learning curve for laparoscopic training and hence will be beneficial for the training of junior residents. 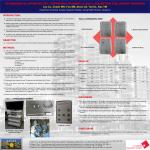