Objective: The stereo endoscope available for clinical use has two camera system which does not allow it to change the focal length of the endoscope during the surgery. Moreover, for the stereo visualization clinicians need to replace the conventional system with a new stereo system which is multiple times expensive compared to the conventional endoscope. Recently, MedicalTek® has introduced a system (MonoStereo®) which can convert a conventional endoscopic video into a stereo video. This study presents an experience with MonoStereo® system in several kinds of surgery.

Method: The MonoStereo® system comprises of a 2D-3D converter device and a 3D monitor. The video input from conventional endoscope is captured by the device and the stereo output of the video is visualized on the monitor. The system allows the user to zoom in and out, and free movement of the endoscope. The stereo perception can be changed by adjusting the human factors such as distance between two eyes.

An IRB approval for using MonoStereo® in surgical cases of urology, gynecology, colorectal, cholecystectomy and ear base surgery was received from Show Chwan Memorial IRB committee. The stereo system was applied on total of 18 patients in Show Chwan Memorial Hospital during December 2014 to June 2016. The surgeries were done by several surgeons using 0o or 30o (wide angle) Karl Storz® endoscope. The surgeries went without any intra-operative complications. The user experience of the surgeons was recorded in the form of questionnaire where each question was scored on Likert scale from 1 to 5. The questions included the experience about 3D perception of the instruments and the surgical anatomy, latency in the display, stress in visualization, usefulness in the surgery and comparison of the stereo visualization with that from conventional 2D endoscopic system.

Results: The average score in Likart’s scale of the user experience for 18 cases is shown in Figure 1. Figure 1: Results of the user experience by the questionnaire scored in Likert’s scale.

Conclusions: The study presents an experience of stereo video produced with MonoStereo® and conventional endoscope. The experience suggests that MonoStereo®is suitable for several kinds of surgeries and is more helpful for such surgeries compared to conventional 2D endoscopic video alone. 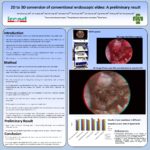