INTRODUCTION: The detection of gastroesophageal reflux (GER) via ambulatory pH testing is a key component of the preoperative evaluation of patients considered for antireflux surgery. Previous reports have suggested discrepancies between multichannel intraluminal impedance-pH monitoring (MII-pH) and wireless based (Bravo) methods. Further, a dual probe MII-pH catheter is often used preferentially in patients with atypical reflux symptoms. We aimed to elucidate the magnitude of this discrepancy and to assess the diagnostic value of MII-pH in a population of patients with mixed respiratory and GI symptoms of GER.

METHODS AND PROCEDURES: The study population consisted of 66 patients who underwent both MII-pH and Bravo pH monitoring tests between July 2009 and 2013. The median time interval between the two tests was 1 day (IQR=2). The vast majority of patients (88%, 58/66) presented with mixed typical and laryngorespiratory (LPR) or solely LPR symptoms; 12% (8/66) had pure typical symptoms. Patient demographics, presenting symptoms, manometric and pH monitoring parameters were collected and compared. Patients were divided into four groups for comparison: both positive, MII-pH negative but Bravo positive, MII-pH positive but Bravo negative, and both negative groups. All studies were done off PPI medications for at least 7 days and a positive study defined by DeMeester score >14.72 on any day.

RESULTS: Nearly half of the patients (44%, 29/66) had discordant test results. Of these, 90% (26/29) had a negative MII-pH but positive Bravo study. In the MII-pH negative but Bravo positive group the difference in the overall score was usually large, a median of 33.5, suggesting that they were true positive. Further, the MII-pH negative but Bravo positive group (26/66) had significant differences in all pH parameters between two methods. There were 3 patients in which the MII-pH was positive but Bravo negative. These patients had similar pH parameters to patients in which both tests were negative suggesting they were likely true negative. Bravo day 1 and day 2 pH parameters were similar for each group. Patients with test discrepancies had slightly higher BMI (28.5 vs. 26.1, p=0.0357) and more associated manometric findings of hiatal hernia (p=0.0173) and structurally defective lower esophageal sphincter (LES, p=0.0208).

CONCLUSION: We identified a high prevalence of discordant ambulatory pH results in patients with LPR symptoms possibly secondary to GERD. The vast majority of these appear to be false negative MII-pH studies. A single 24 hour Multichannel intraluminal impedance-pH study may be an inadequate test to exclude GERD in this patient population. 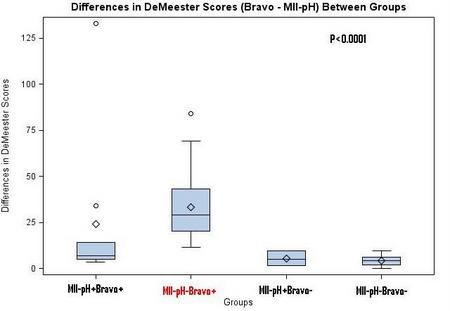