Introduction:
The two most commonly performed procedures for bariatric surgery include Roux-en-Y gastric bypass (RYGB) and adjustable gastric banding (AGB). While many studies have commented on short-term, postoperative outcomes of these procedures, few studies have reported long-term data. The purpose of this study was to compare long-term, postoperative outcomes between RYGB and AGB.

Methods:
This was a retrospective, cohort study comparing all patients undergoing either RYGB or AGB at our institution, from January 1998-August 2012. Patients were followed at 1-, 3-, and 5-year intervals. Categorical and continuous data were analyzed. Multivariable, linear regression was performed.

Conclusion:
Our results support previous studies that have observed a greater weight-loss associated with RYGB as compared to AGB and provide further evidence towards the long-term sustainability of this weight-loss. Additionally, RYGB appears to result in a greater reduction of medical comorbidity. 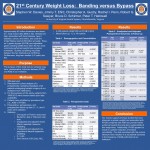