Introduction: We previously reported face, content, and construct validity as well as high reliability measures and significant performance improvement for 9 inanimate exercises as part of a comprehensive, proficiency-based robotic training curriculum. The purpose of this study was to determine 1-year skill retention for this curriculum.

Results: 27 trainees (general surgery (n=7), urology (n=8), and gynecology (n=12)) participated in retention testing 12.5 ± 4.8 months after initial training. All trainees demonstrated significant improvement during initial training: pretest score 550 ± 147 vs. post-test 940 ± 50, p<0.001. A significant amount of skill loss (14.0%) was detected at retention testing (Rep1 809 ± 89, p<0.001 vs. post-test). A non-significant amount of improvement was detected on further retention testing (Rep2 848 ± 9, p=n.s. vs. Rep1). Ultimate skill retention (Rep2 vs. post-test) for the entire cohort was 90.2% and ultimate performance (Rep2) was not significantly different from performance immediately after training (post-test). Individuals who did not perform interval robotic cases had significantly worse retention (81.3%) compared to those with interval experience (90.9%, p=.013). Similarly, individuals who required a large amount of practice (>80 repetitions) during initial training had significantly worse retention (79.7%) compared to those who required less initial practice (89.6%, p=.017).

Conclusions: These data suggest that the proficiency-based curriculum is robust, yielding a very high level of skill retention. However, interval operative experience was associated with the smallest amount of skill loss. Skill also improved with minimal additional practice (i.e. by Rep2). For individuals who do not routinely perform robotic operations, additional simulation-based practice may be beneficial in optimizing skill retention. 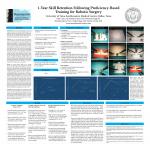