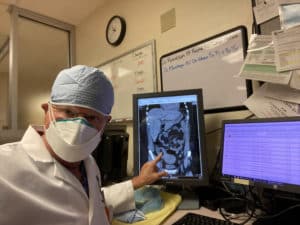 SAGES has been a big part of my professional and personal life since I began residency at the University of Illinois Metropolitan Group Hospitals Residency in General Surgery in Chicago in 1987. My professors believed strongly that endoscopy is best performed by surgeons and that skill should be part and parcel of any full scope general surgery residency. In addition, the first cases of laparoscopic cholecystectomy occurred during those years from 1987-19292. SAGES was the beacon of excellence and safety during that time and continues to lead all organizations with content on endoscopy and MIS surgery, and in safety, best practices, research and education. I have had the great opportunity to present my work and videos at SAGES and currently serve as a member of the Advocacy Committee. SAGES is an extension of my surgical family, and I try never to miss the chance to connect with my SAGES family.

Dr. Dobbertien serves on the ACS Board of Governors Executive Committee, is President of the Alumni Senate at Midwestern University, President-Elect of the Duval County Medical Society and Secretary of the Florida Chapter of the American College of Surgeons.