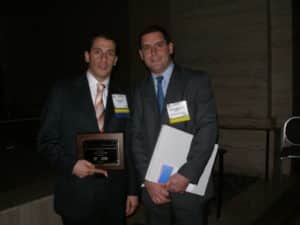 “SAGES is my surgical family,” says Dr. Carlos Galvani. “I haven’t missed a meeting since 2002 and I don’t plan to in 2021. SAGES annual meetings are the best way to see and catch up with friends.”

Dr. Galvani adds that from his very first post-9/11 meeting in New York, the entire program – especially the finale dinner —  “was so powerful. I remember thinking that SAGES was the place I wanted to be.”

An involved SAGES member since joining as a fellow in 2002, Dr. Galvani was awarded the Storz-IRCAD Visiting Fellowship Award in 2006 and has been very active, serving on the Bariatric, Robotics and Foregut committees. He admits he initially thought it was merely “cool” to be on these committees, but became much more invested after realizing how important each committee and its guidelines were to SAGES and patient access.

While Dr. Galvani, who is looking forward to this year’s Sing-Off in Las Vegas, also attaches the cool factor to SAGES meetings, he adds, “The meetings are unlike any put on by other societies. Members, include leadership, are always willing to meet and sit down and chat with you. The whole thing is an intense experience, and one that always reinforces my ongoing commitment to mentor other surgeons and become more involved in committees that are relevant to surgeons’ practices.”

A good antidote to professional intensity: Dr. Galvani listens to Yo-Yo Ma on his way to work each day, and enjoys “a good steak, a glass of Malbec and golfing in the rain.”