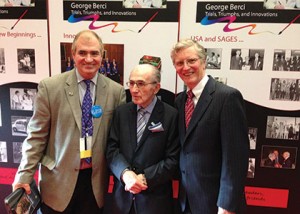 More than a year ago the Society of American Gastrointestinal and Endoscopic Surgeons (SAGES) and the SAGES Foundation commissioned a documentary film to be made about the life and medical innovations of Dr. George Berci. The film debuted on April 18th as part of the SAGES 2013 Annual Conference.

“George Berci -Trials, Triumphs, Innovations”  covers Dr. Berci’s life journey, from his time as a forced laborer during the holocaust, to his indelible impact on the face of surgery, through his unmatched contributions to the field. The film was written and produced by SAGES President-Elect, Dr. L. Michael Brunt. Dr. Brunt is professor of surgery at the Washington University School of Medicine in St. Louis and is the 2013 recipient of the Philip J. Wolfson Outstanding Teacher Award.

“Until I was making this film I had no idea how much Dr. Berci’s work impacted every phase of endoscopic surgery from access, to light, to image,” said Dr. Brunt. “There is no doubt that his ideas and his work have changed the face of surgery.”

The documentary features archival footage, interviews with Dr. Berci and his wife, Barbara, and many surgeons in the field whose work he has impacted.

Dr. Berci is a founding member and past president of SAGES which just celebrated its 30th year in 2011. In honor of Dr. Berci, SAGES created the George Berci Lifetime Achievement Award in Endoscopic Surgery, the highest honor SAGES awards, which is bestowed for a lifetime contribution as an innovator in the field of endoscopic surgery, which may be scientific, technological or educational.

In 2011, Dr. Berci received the Jacobson Innovation Award from the American College of Surgeons (ACS), recognizing him for 50 years of innovations that have transformed surgery and as a pioneer who developed the endoscopic and laparoscopic techniques that provide the basis of all minimally invasive surgeries performed today.

As the senior director of Minimally Invasive Endoscopic Research at Cedars-Sinai, Dr. Berci has not only led his field with new visualization techniques, instrument minimizing and high-definition cameras, he has worked at the forefront of the profession to improve patient care, increase safety and better surgical outcomes.  As the film highlights, Dr. Berci began his surgical career in 1953 in Budapest, where he helped establish one of the first experimental surgery programs in Europe. His passion for creating tools to improve the imaging and viewing capabilities of endoscopes brought him to academic institutions around the world for the past 40 years. More than a half century after he pioneered endoscopy techniques and technologies, Dr. Berci continues his pathbreaking work in the field, which most recently has included creating and using an enhanced endoscopic method to intubate patients with particularly difficult airways and video microscopy.

“George Berci -Trials, Triumphs, Innovations”  will soon be available for viewing at www.sages.org.